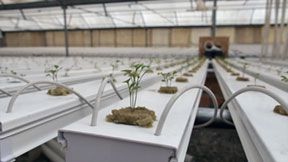 It’s not easy being green these days — especially when you share space with more than 3 million people. And yet, one Southern California company is making it its business to do just that.

BP Gardens began as a seed of an idea from Haas, who says, the thought was to use as little water and energy as possible, while still yielding fresh produce and herbs for customers.

“With California consistently facing severe droughts, these systems will help change the way we grow [food], modernizing its processes to become more sustainable for the future,” says Haas.

The Buena Park location has currently completed its construction and has planted its first crops, which is ideal for leafy greens, while Lincoln is in the process of installing floating and introducing fish in preparation for its first crops.

This location will focus on the growth of heavy greens and Sacramento Perch for its customer base. Between the two locations, Haas said he anticipates growing 45,000 heads of lettuce a month.

In addition to finding a way to combine technology and food production, while reducing the company’s own carbon footprint, Haas has also stumbled on a niche market in the medical marijuana industry. While GreenGro does not participate in the sale of medical marijuana, Haas said GreenGro’s equipment and advanced hydroponic systems benefit that industry as well.

Although Haas estimates that about 60 percent of his customers buy his gardening equipment to grow medical marijuana, he says he remains focused on his BP Gardens projects, and isn’t content to stop with the California market, but believes he can take his idea worldwide.

“BP Gardens want to go big,” says Haas. “We want to be the source food and not have to have it travel, and save the Earth.”

How to Beautify the Backyard for Outdoor Entertaining

How to Protect Your Data in a Connected World

The Energy Upgrade Every Room Needs

Three Home Upgrades Worth Your Money

This information is deemed reliable but not guaranteed. You should rely on this information only to decide whether or not to further investigate a particular property. BEFORE MAKING ANY OTHER DECISION, YOU SHOULD PERSONALLY INVESTIGATE THE FACTS (e.g. square footage and lot size) with the assistance of an appropriate professional. You may use this information only to identify properties you may be interested in investigating further. All uses except for personal, non-commercial use in accordance with the foregoing purpose are prohibited. Redistribution or copying of this information, any photographs or video tours is strictly prohibited. This information is derived from the Internet Data Exchange (IDX) service provided by Sandicor®. Displayed property listings may be held by a brokerage firm other than the broker and/or agent responsible for this display. The information and any photographs and video tours and the compilation from which they are derived is protected by copyright.Â Compilation ©2022 Sandicor®, Inc.